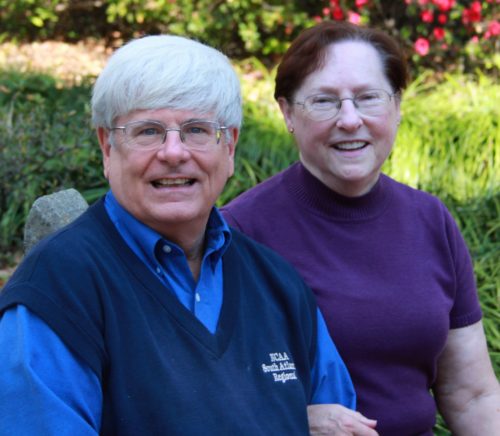 But their community impact goes much further. Together, and separately, they volunteer countless hours of their time to the Symphony staff, musicians, patrons and area schoolchildren, as well as their church, and local service club. At their church, Sue and Walt have been founding members of the Pairs and Spares Sunday School Class for 48 years, acted as counselors for the youth choirs, led and participated in multiple Bible studies, provided leadership to the older adult ministry, ushered, painted, and more.

“When I first moved to town, Walt was the President of the Augusta Rotary as I joined. He was an exemplary Rotary President, welcoming me in every way possible. It was easy to see his genuine appreciation for and embodiment of Rotary’s motto, Service Above Self, as well as for the community of civic neighbors that Rotary offered. More recently he has helped Episcopal Day School as the “face” of our school in the front office each morning. In addition to being the epitome of customer service, he brings great good cheer, fun, and affection to everyone who crosses our threshold.”

Additionally, Walt has been a Rotarian in Augusta since 1991, acting as its President in 2003-2004, and is a Rotary Club Paul Harris Fellow. And, Walt received the University of Georgia System’s Chancellor’s Customer Service Champion of the Year Award in 2009.

Sue has tutored or provided some level of learning support for hundreds of children in the CSRA. In addition, Sue is a retired educator from Episcopal Day School, where she spent 47 years as a second-grade teacher, substitute, tester, and tutor – still tutoring children whenever asked. Additionally, Sue received the Volunteer of the Year Award from both Leadership Augusta and the Greater Augusta Arts Council, and Sue was chosen as a Woman of Excellence in the Arts by the Girl Scouts. Sue is also a Rotary Club Paul Harris Fellow.

They have both been active at Trinity on the Hill UMC as founding members for 48 years of the Pairs and Spares Sunday School Class. Walt has served the class as President, Treasurer, and Program Chair. At Trinity, Sue served as the Chairman of the White Elephant Sale for Missions for many years. Walt has held positions as Treasurer, Finance Chair, and Chair of Pastor Parish Relations. Sue and Walt have been active in the Summerville Neighborhood Association, Walt as President, Sue as Secretary and Tour of Homes chair three times.

Sue and Walt have not only impacted the lives of those they serve, they have set a perfect example of servant leadership for the volunteers they recruit and the people they lead. Their work ethic and joyous but silent donation of thousands of hours of time to this community is exemplary. One nominator said,

“Although humble, quiet, unassuming, and uninterested in recognition, they are both, separately and together, a powerful and consistent presence of generosity, grace, and light in our world.”

Stay tuned to learn more about the award, the event honoring the Alexandersons in February, and how you may nominate couples for future awards.